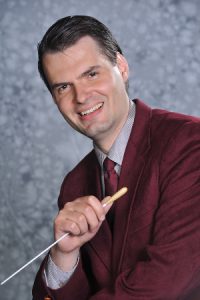 Slava Michael Prudchenko is Associate Professor of Music at Perimeter College. He has been conductor of the Perimeter College Community WInd Ensemble since 2004. He is a Winner of the 2014 National Institute for Staff and Organizational Development (NISOD) Excellence Award for his online course design. Mr. Prudchenko is an active solo/ensemble performer, conductor, educator, and adjudicator. Besides being a Conductor of the Georgia Perimeter College Wind Ensemble he also teaches Online Music Appreciation, and Online Music Fundamentals. In the past decade he has taught various music classes such as Music Theory, Ear Training, hybrid/face to face Music Fundamentals & Music Appreciation, Applied Woodwinds, and Survey of Music Literature.

In the past Mr. Prudchenko served as a Guest Conductor & Adjudicator for the Atlanta Flute Fair, Volunteer Conductor for the Seven Rivers Presbyterian Orchestra, Band/Orchestra Director at Piper High School (Florida), Vice-President of the Ukrainian Flute Association, Principal flutist of the Kiev Symphony Orchestra & Chorus, Flutist of the Symphony Orchestra of the National Opera House of Ukraine, Member of the Woodwind Quintet at the National Philharmonic Society of Ukraine.

Slava performed in many recitals and took part in various festivals, performances, and master classes across the USA, Ukraine, France, and Germany (1992-now). Slava earned the First Prize at the International Chamber Music Competition in Khmelnitsky (Ukraine, 1993). For six years Slava was a member of the flute quartet “Perimeter Flutes”, well-known in the Atlanta, GA area. With this group he performed at the 39th Annual Flute Association Convention in Charlotte, NC. He performs in a regular GPC faculty recital series with Ginger Chen, piano.

Read about our Next Concert